With almost every country into garment export business, since it is the first stage of industrial development and foreign trade, there are already ‘China Plus 100’ suppliers. Hence, there is no need to look for ‘China Plus One’.

‘China Plus One’ is a strategy based on the belief that importers should diversify their supplier base away from China towards other countries. This concept has been around for well over a decade, waxing and waning. In recent years, the perceived need to move away from China has revived the China Plus One strategy, not only because importers worry about a China takeover, but also because Western countries have weaponized trade.

Use of Trade as a weapon

The Trump administration raised tariffs on China’s exports to the United States for political reasons. More recently, trade has become the weapon of choice in the war between Russia and the West. In this new war, international trade has replaced bombers and tanks. Just as Russia threatens to stop exporting natural gas to Germany, the US has threatened to take away most favored nation (MFN) status from Russia and other countries that support Russia. When we recognise that the average US import tariff for MFN countries is 2.5 per cent, and without MFN the average tariff would leap to 70 per cent, we can understand why the Chinese Government hesitates to support its ‘friend for life’ Russia.

However, the US IT giants have reason to be concerned. Imagine the effect of an embargo on made in China imports would have on Apple cell phones.

At the other extreme, the original underlying concept — China is taking over — is a misnomer. The EU is the world’s largest product exporter with a marketshare of 30 per cent, more than twice that of China’s 14.7 per cent (Figure 1). I have yet to hear a claim that Brussels is taking over. 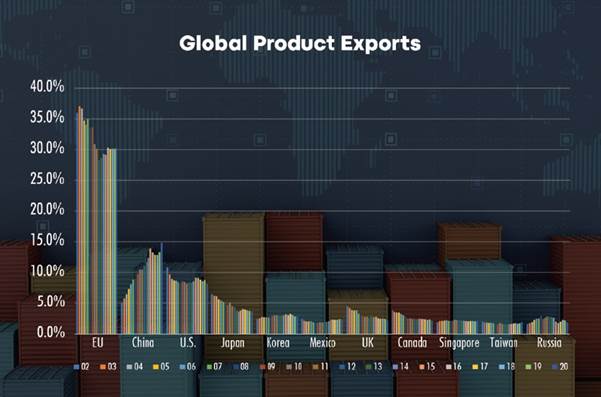 There are, however, certain strategic products where China’s marketshare might cause concern. Two important examples are, as we can see from the graphs below electronic products and components (Figures 2 and 3). 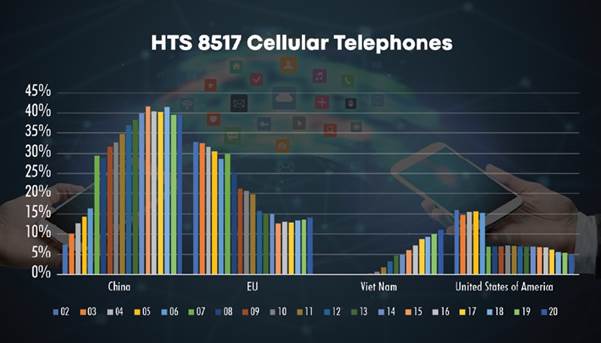 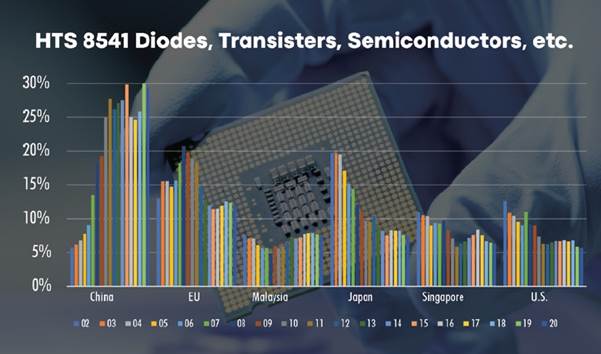 When we look at China Plus One and its effect on the garment industry, we see an entirely different picture.

First of all, we need not develop new suppliers. It is because garment exports are the first stage of industrial development, as well as a country’s entry point into international trade. Everybody everywhere is in the garment exporting business. So, people in the garment industry are not looking for China Plus One, when they already have ‘China Plus 100’. 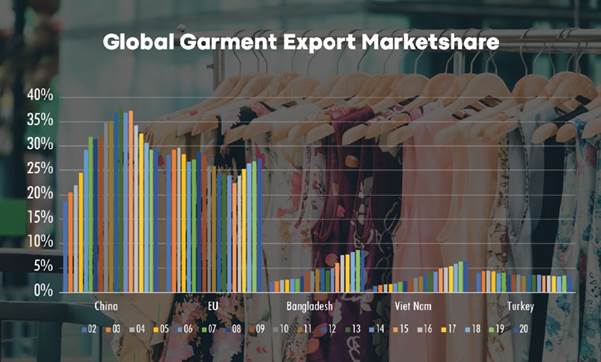 What is true of global data is equally true of China’s US garment import marketshare. As we can see from Figure 5 China’s marketshare measured by value peaked in 2010 at 39 per cent and the fell to 25 per cent in January 2022, a decline of 35 per cent, very similar to the situation in the EU with regard to China’s garment export marketshare. 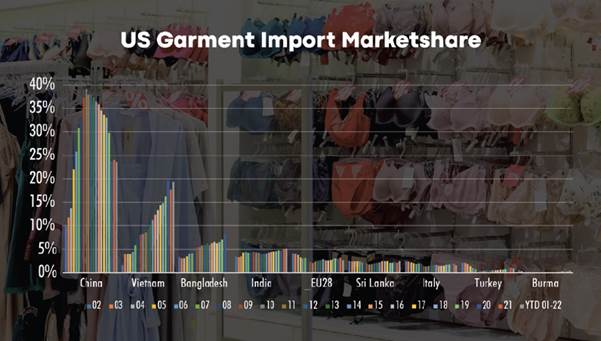 To understand whether China will ever return to its previous dominant position making China Plus One a viable strategy, we must first understand why China’s marketshare first rose to the top and then declined.

Almost from the outset China enjoyed one unique advantage over all its competitors. The garment industry was able to supply all types of garments. China was the first and only universal shopping centre.

The US Government’s Office of Textiles and Apparel (OTEXA) lists 104 garment product types. Previously, of all garment exporting countries, China alone could supply all 104.

As you can understand, the more exotic the product type, the fewer the buyers and the smaller the orders. This was an area in which Chinese factories specialized.

Figure 6 analyzes product types for which China’s US marketshare was above 50 per cent and the total value of these special products represented over 50 per cent of China’s total exports. 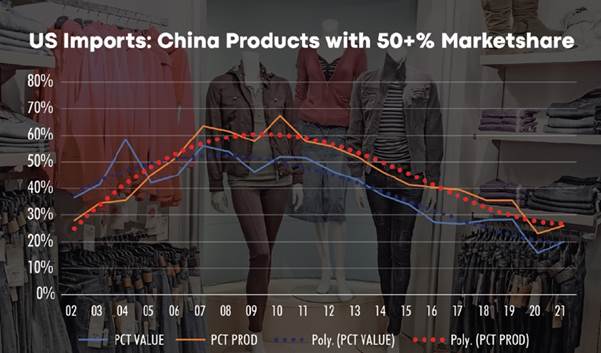 Once again, as we have seen above, 2010 was the peak year for China’s garment exports to the US. When we look at the exotics, we see the same trend.

b. In 2010, 52 per cent of China garment export revenue was derived from the exotics.

Everybody produces T-shirts, jeans, and underwear. China’s greatest advantage was that while it too produced these basic commodities, its main production and value to the importer was in the exotic products that others did not and/or could not produce.

The decline in China’s US marketshare mirrors China’s decline in the export of exotic products. By 2021 China’s exports of these products had fallen from 70 product types to 21 product types — a decline of 80 per cent and its marketshare of exotics had fallen from 52 per cent to 24 per cent — a decline of 54 per cent. China’s industry had ceased to be unique.

Where once customers flocked to China because they alone could meet all the customers’ demands, other garment exporting countries are now able to compete, by providing most of the same exotic products.

Thus, China Plus One is irrelevant to the garment industry today because China has lost its unique position. It has become ‘the first among equals’.